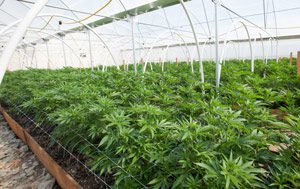 If you believe that cannabis is the wave of the future, as we do, then the hits keep coming. And the catalyst we’re about to show you today could be the biggest yet for marijuana stocks…

More states, including Arizona, Delaware, and New Jersey, are close to making some form of cannabis use legal this year.

New York is getting on board as state Democrats plan to endorse marijuana legalization at their May 23-24 convention. And just this week, New York City Mayor Bill de Blasio told police to end arrests for marijuana use in public.

But the biggest catalyst for marijuana stocks by far is the coming vote in Canada on June 7. And there is so much support north of the border that the vote is almost a formality.

You see, the entire country is expected to make medicinal and recreational weed fully legal in just a few weeks’ time. The Canadian Senate is on track to vote on the bill to authorize legal use of recreational marijuana by June 7.

The June 7 vote will be a boon for investors, including U.S.-based investors, because Canadian cannabis companies are easy to buy and easy to own.

How do we know the legal weed wave is coming? Money Morning Defense and Tech Specialist Michael Robinson recently sat down with Dr. Avtar Dhillon, the newly appointed chair of the Cannabis Canada Council, the nationwide industry association, about the state of the Canadian cannabis industry.

For starters, the delay in getting to the June vote gave Canadian companies time to get their loonies in a row in preparation for the floodgates of competition opening. And talk about pent-up demand. There is a lot of investment money sitting on the sidelines – and chomping at the bit – because it has not yet been able to get to work in this burgeoning industry.

The global medical cannabis market alone is expected to reach $55.8 billion by 2025, according to Grand View Research.

Robinson asked about the rough first quarter for pot stock investors, as the entire sector pulled back substantially. Dillion responded with great optimism and talked about the changing environment in Washington, as well as the expanding body of research showing how cannabis can help fight the opioid crisis.

That alone would be reason enough, but the biggest near-term catalyst is hands down the legalization vote in Canada. Since the outcome of the vote is near certainty, the market will look forward to August, when legal recreational cannabis finally goes on sale.

Canada is the second-largest single market for legal cannabis in North America behind California, according to Arcview Market Research and BDP Analytics.

Canada’s total legal weed market, when recreational use is legalized and regulated, could soon reach $22.6 billion, a Deloitte study notes.

“Legalization is one of the greatest opportunities in the world at this point and in the foreseeable future,” Dr. Dhillon says.

Meanwhile, growers in Canada have been working hard to expand production capacity. But while the production and sales sides seem to be moving along nicely, the overlooked factor that Canada brings to the table is the financial side. Financial institutions have thus far been limited in their participation, either by previously perceived high risk that companies would have enough crumbs to eat or by regulation prohibiting them completely.

Best of all, legalization brings legitimization. In fact, the Bank of Montreal co-led a stock offering in the sector in February, marking the first time one of the country’s big banks came into play.

And mergers have already started there, too. Aurora Cannabis will buy rival MedReleaf for $2.51 billion. In other words, the financial aspect of the new legal marijuana industry is revving up.

As we said, the hits keep coming.

Five Penny Pot Stocks That Could Make You Millions?

A momentous government announcement is about to change the face of legal marijuana forever – and you could make more money from the stock market than you’ve ever seen in your life.

You see, thanks to this historic legislation, tiny pot stocks trading for under $5 are expected to double, triple, or quadruple.

We’ve been tracking five tiny pot stocks positioned for a massive upward jolt – the kind of gains with the power to turn a small stake into a $100,000 payday.